With increased movement of people and goods around the world, there is an increased 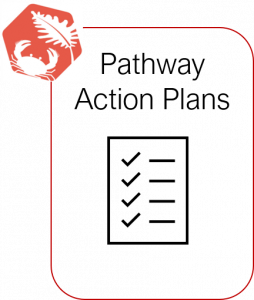 Pathways are the routes and mechanisms of the introduction and spread of invasive alien species (IAS).

The purpose of Pathway Action Plans (PAPs) is to prevent or minimize the risk posed by the pathways using measures such as raising public awareness and setting out actions to prevent unintentional introductions by minimizing the contamination of goods, commodities, vehicles, and equipment by invasive alien species, and ensuring appropriate border checks.

Three pathway action plans are currently under development in Ireland for the following pathways:

These Pathway Action Plans (PAPs) are three in a series of plans that will be developed  to reduce the risk of introduction and spread of invasive alien species in Ireland.

CONSULTATION NOTICE: the following draft pathway action plans were available for public consultation from 09 December 2021 to 04 February 2022. This consultation phase is now closed.  Click here to view the Submissions Report.

With increased globalization there is an increase in the movement of non-native species around the world (Hulme, 2009). Numerous non-native species, many introduced only in the last 200 years, have become successfully established over large areas of Europe (Hulme et al, 2009). Furthermore, biological invasions are widely expected to become a greater problem in the future (Lodge et al, 2006; Sutherland, 2008). Research by the European Commission funded DAISIE project, showed that non-native species are invading Europe at an unprecedented rate. 10,822 non-native species are listed for Europe of which 10-15% are expected to have a negative economic or ecological impact (European Commission, 2008). This is mirrored by recent trend analysis of non-native species introductions for Ireland where 13% of the species recorded and assessed in Ireland are high impact invasive species (O’Flynn et al, 2014). The trend analyses also showed that 4 times as many species were recorded in the 20th Century as in the previous one with the trend of introductions increasing dramatically from 2001 to 2010 for high impact invasive species. Actions to help prevent further introductions is required.

As there are likely to be a multitude of introduction pathways for very many non-native species, prioritizing those pathways that are likely to introduce most invasive species with potential to have the highest impact, is the most effective way to target limited resources to have the greatest preventative effect.

The EU Regulation on Invasive Alien Species [1] entered into force on 1st January 2015. This Regulation is based on the Convention of Biological Diversity’s Guiding Principles of prevention, prioritization and coordination and seeks to address the problem of Invasive alien species in a comprehensive manner. The objective is to protect native biodiversity and ecosystem services, as well as to minimize and mitigate the human health or economic impacts that these species can have.

Core to the Regulation is a list of Invasive Alien Species of Union concern for which a general ban from the European Union including restrictions on introduction, transport, trade, keeping, breeding and release into the environment, is established. Other obligations also apply including notification of new occurrences, rapid eradication or management of species, establishment of surveillance systems and, adoption of action plans on the priority unintentional pathways for the IAS of Union concern.  For a species to be listed it must satisfy certain criteria of the Regulation and be based on risk assessment which includes a description of the potential pathways of introduction and spread, both intentional and unintentional.  Once a species is listed as an Invasive Alien Species of Union concern, various articles of the Regulation are implemented in a phased manner within given timeframes. Currently, there are 66 listed Invasive Alien Species of Union concern.

Under Article 13(1) of the EU Regulation on IAS, Member States are required to carry out comprehensive analysis of the pathways of unintentional introduction and spread of invasive alien species and ‘identify the pathways which require priority action because of the volume of species or of the potential damage caused by the species entering the Union through those pathways’. By analysing the risk of each of the IAS of Union concern being introduced and spread in Ireland with the potential impact they may have, the associated pathways are ranked and prioritized. For the priority pathways, Pathway Action Plans are developed

The Article 13 requirement for development of pathway action plans is in line with the international Convention on Biological Diversity Strategic Plan for Biodiversity 2011-2010 Aichi Target 9 (CBD, 2010) and the similar European Commission’s Target 5 of the EU Biodiversity Strategy to 2020 which states ‘By 2020, Invasive Alien Species and their pathways are identified and prioritized, priority species are controlled or eradicated, and pathways are managed to prevent the introduction and establishment of new IAS’.

[1] The official title of the EU Invasive Alien Species Regulation is: Regulation (EU) No 1143/2014 of the European Parliament and of the Council of 22 October 2014 on the prevention and management of the introduction and spread of invasive alien species.

Researchers from UCD are assessing the distribution & density of invasive Himalayan balsam on the Liffey. This research was commissioned by @KildareCoCo & funded by @DeptHousingIRL

Tomorrow's #INNSweek theme is biosecurity! This funny video by @TheGreenBlue highlights the serious issue of inadvertent spread of invasive species through boating activities.🛥️🚣‍♀️

Invasive species travel with you… wherever you go!

They can cause real problems for boating, from restricting navigation, blocking waterways, to clogging up propellers and spreading disease.

How can you take part in Invasive Species Week?

Consider hosting an information event, looking out for invasive species in your locality & report sightings.