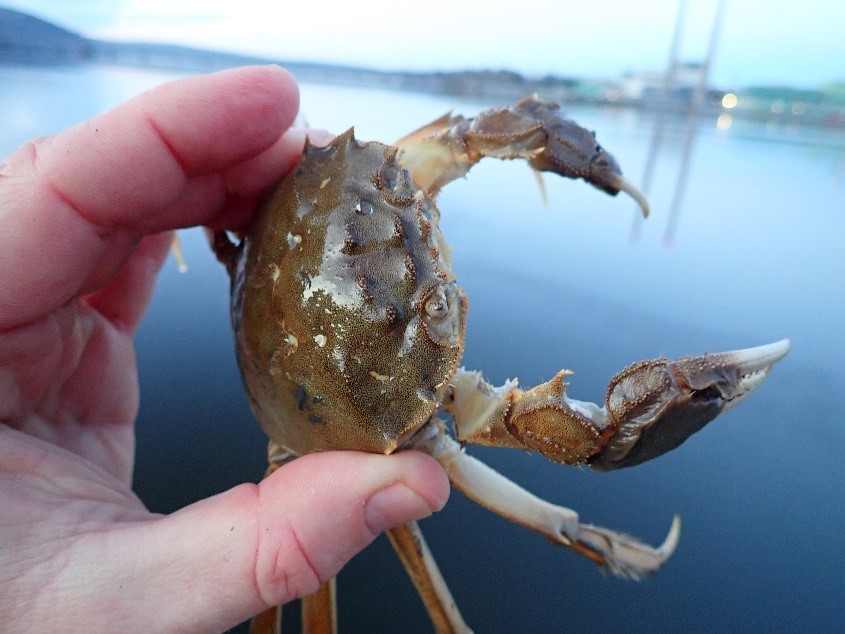 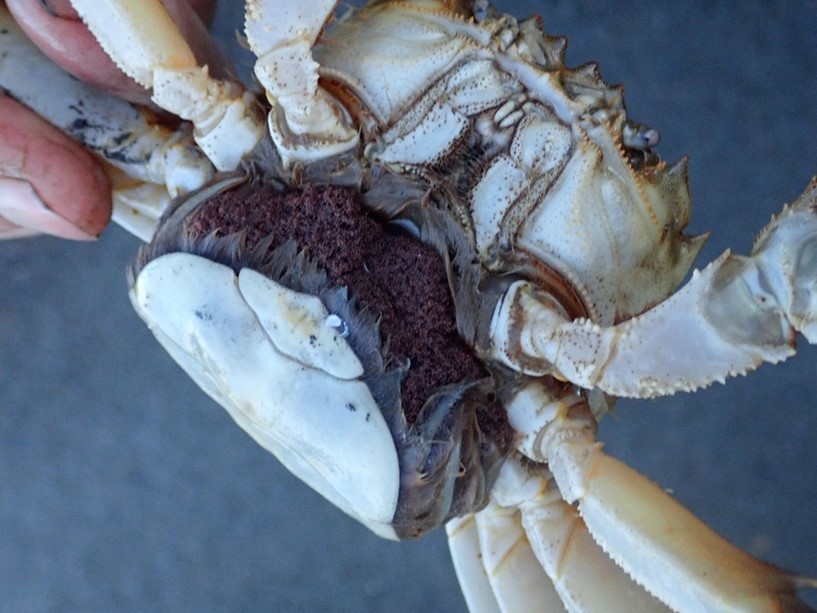 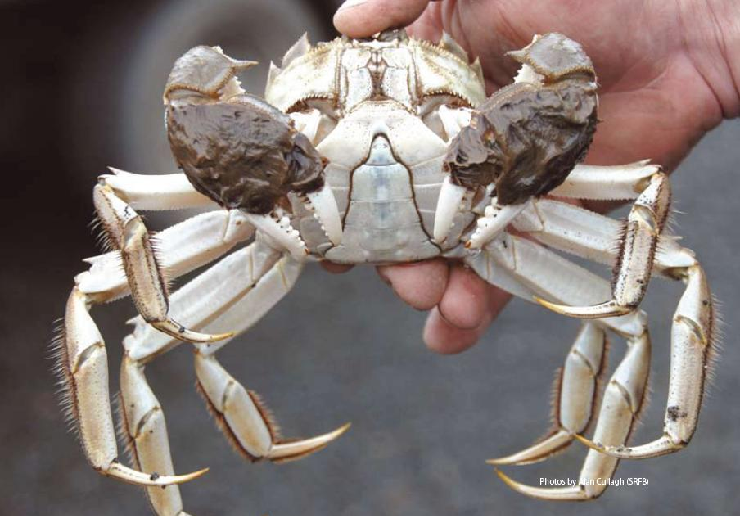 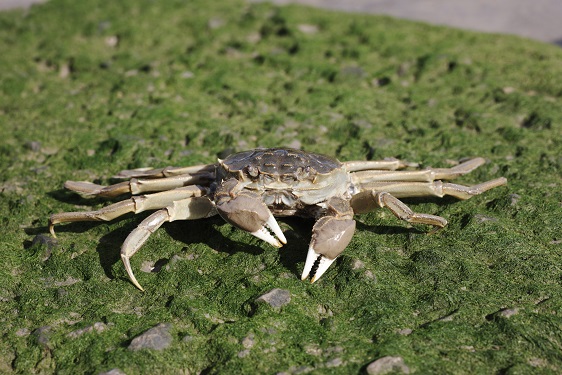 Legs twice as long as the carapace (Photo: Shutterstock) 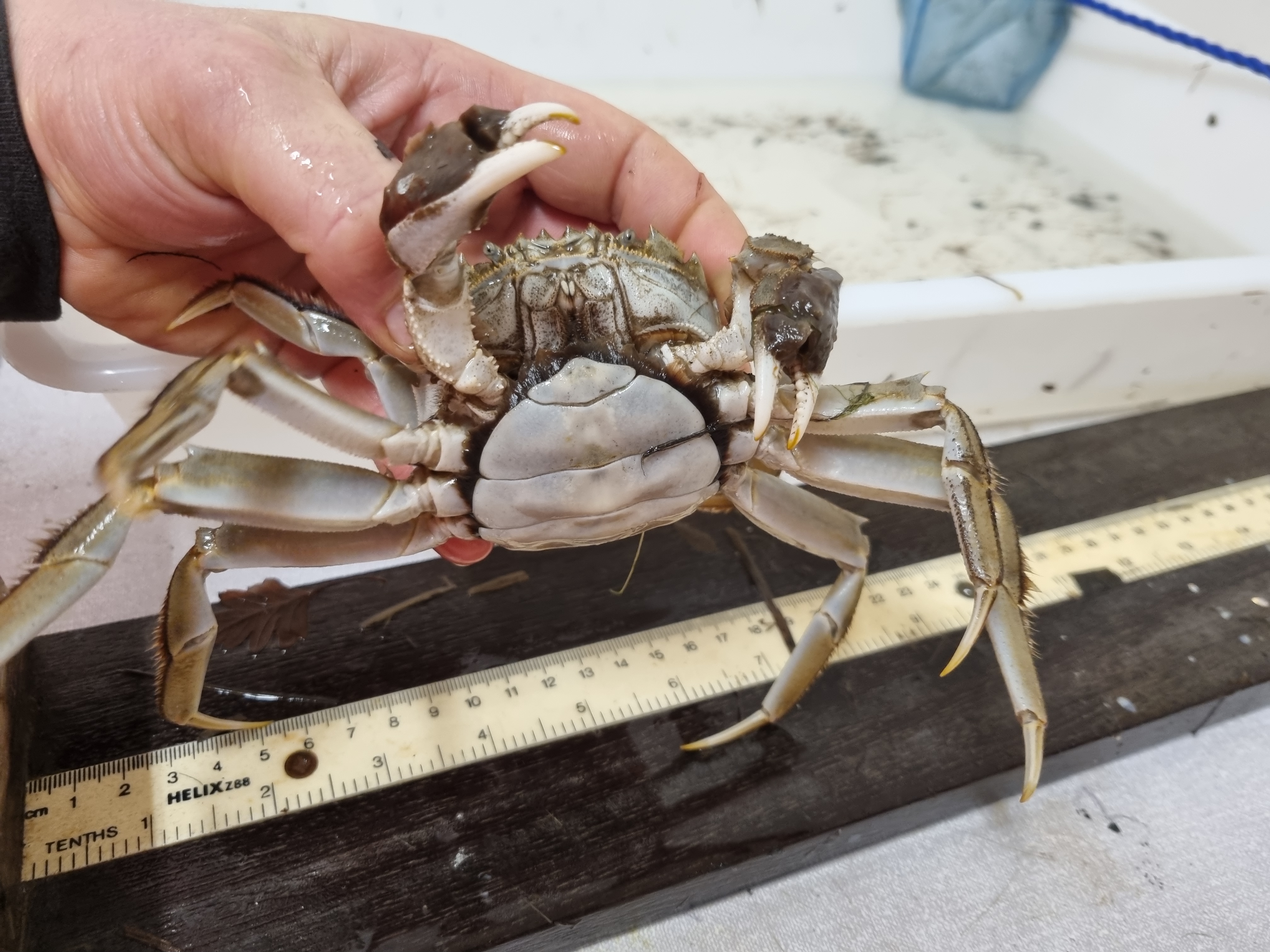 Alert issued by: the National Biodiversity Data Centre on behalf of the National Parks and Wildlife Service (NPWS)

Reason for issue: to notify of the reappearance of Chinese mitten crab in Ireland, a regulated Invasive Alien Species of Union concern.

What was seen and when: One berried female with eggs showing signs of development to Zoea stage, captured by net on 25th January 2021. Another female was photographed 25th December 2020. No other individuals detected during monitoring at this time (up-date May 2021).

Introduction status: Localized. It has been recorded on three occasions in Ireland from Waterford harbour. One individual was recorded in 2006, 16 crabs in 2009 and 2 crabs in 2021. One of the Chinese mitten crabs caught in 2021 was of a berried (reproducing) female. It is not known to be present in Northern Ireland. See Biodiversity Maps.

It is unknown how they were introduced into Ireland. Most likely source of introduction is as larvae in ballast water or as adults on ship’s hulls, though it is possible they could be intentionally brought to Ireland as an aquarium or food species and accidentally or intentionally released.

The berried female crab was detected by a private individual netting for codling and reported under the ‘Targeted monitoring and survey for the presence of Chinese Mitten Crab, an invasive alien species’ survey.

Management actions taken to date for this 2021 sighting:

The Chinese mitten crab life cycle includes phases spent in the marine, brackish and freshwater environments. Most of its life cycle is spent in rivers as an adult but it must migrate to deep, open saltwater locations to reproduce. Once the crabs have mated the males are thought to die, leaving the females to brood the eggs. In the spring, the eggs hatch into larvae and after about six to seven weeks these metamorphose into juvenile crabs, which then migrate back up the river into freshwater to complete the life cycle.

Adults usually live in burrows in muddy riverbanks where field signs include small burrows on soft sediment river banks.  Aquatic vegetation and marshes may provide an alternative habitat. Dead crabs might be seen washed ashore on river banks and shore areas. Chinese mitten crab are also able to migrate across land unlike all other crab species in Ireland.

Invasive status: Assessed as having the potential to be a high impact invasive species in Ireland. It is in the Top 10 2017 Horizon scan list of species most likely to arrive, establish and have impact between 2017 and 2027. Chinese mitten crab is one of 66 invasive alien species of Union concern under EU Regulation (1143/2014). It is listed on the Third Schedule Part 2 of the European Communities (Birds and Natural Habitats) Regulations 2011 in Ireland. This species is listed as among 100 of the worst invasive species in Europe.