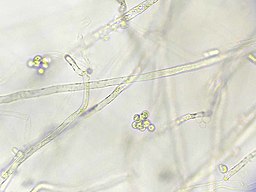 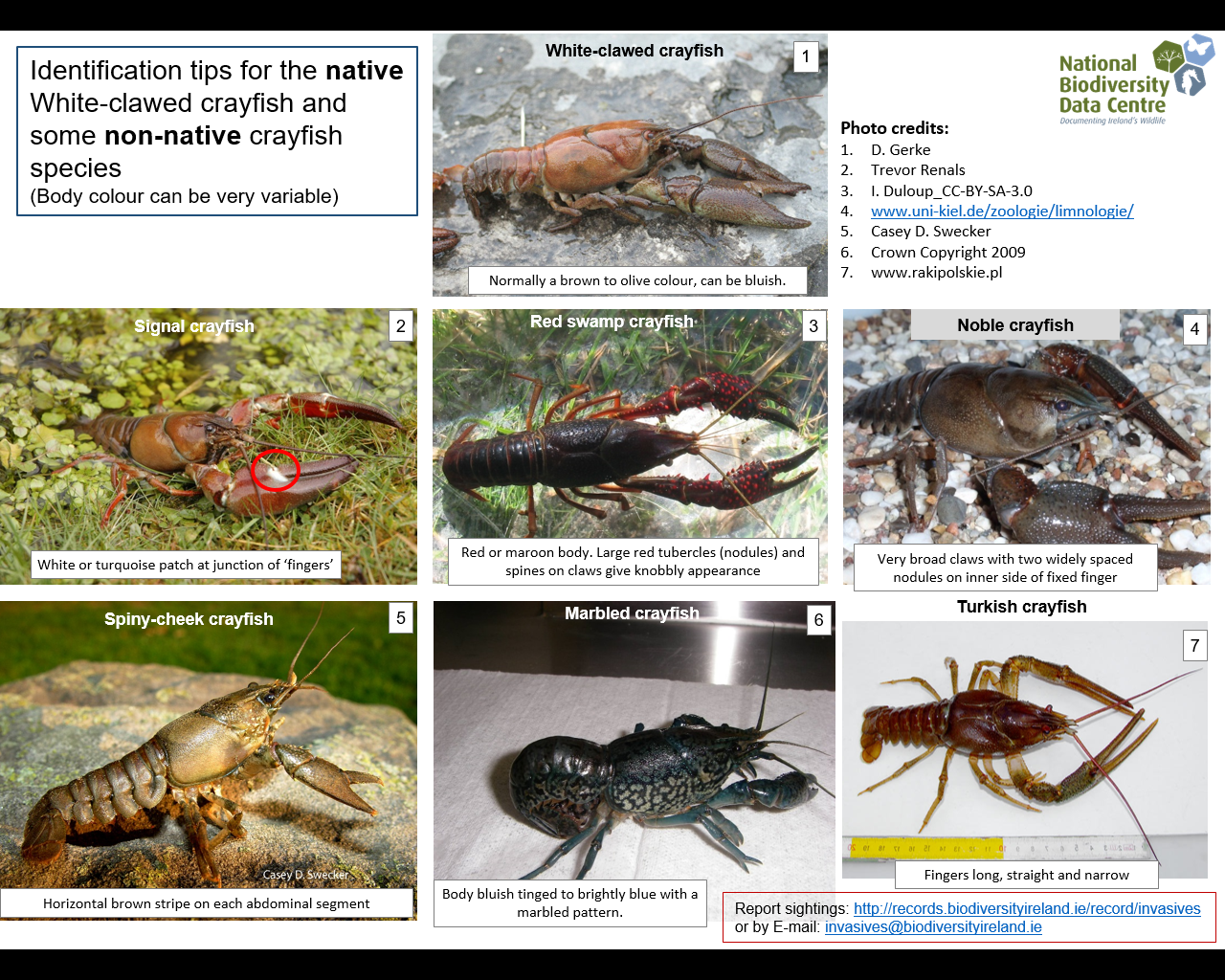 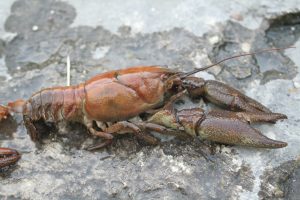 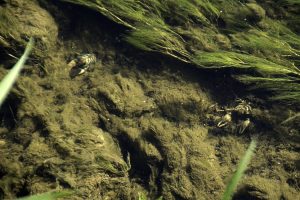 Dead White-clawed crayfish in the River Suir (B. Nelson) 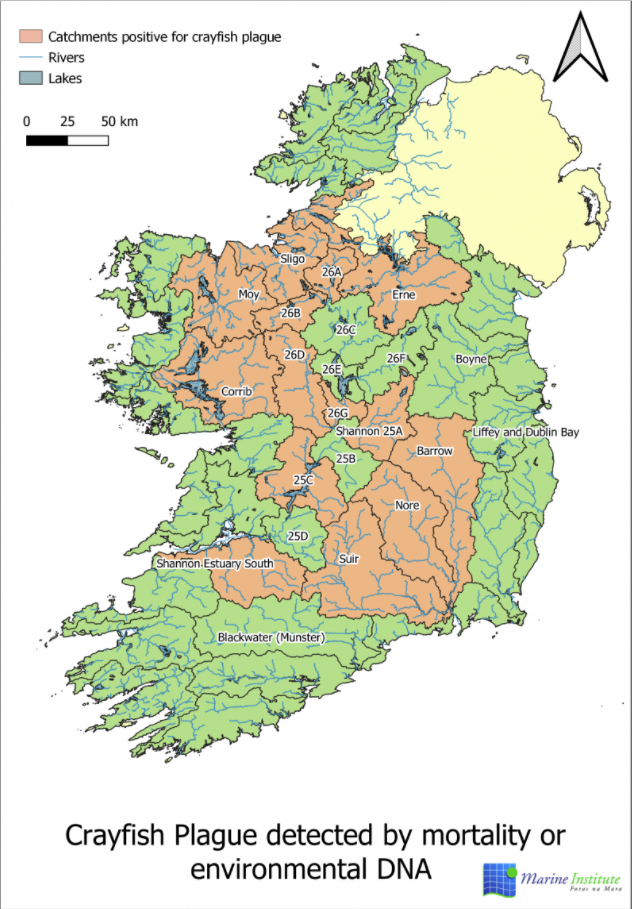 NPWS are recommending that the voluntary ban of Emergency Containment Measures for the affected catchments is  lifted from March 1st, 2018 but with the strong advice that all water users continue to exercise vigilance and adopt procedures to minimize the risk of further spread of the disease.
The single most effective action is to use the Check, Clean, Dry protocol this should be done routinely before and after visiting a river or lake.

Check, Clean and allow all equipment to thoroughly DRY-out then dry for further 48 hours.
If drying out equipment is not feasible equipment should be either:
o Power Steam washed at a suitably high temperature (at least above 65 degrees)– use of mobile steam power washers or use of nearby power washers at Service stations as an alternative.
o Disinfect everything using an approved disinfectant such as Milton (follow product label), Virkon Aquatic (3mg/L), Proxitane (30mg/L) or an iodine-based product for 15 minutes. Items difficult to soak can be sprayed or wiped down with disinfectant. Engine coolant water or residual water in boats/kayaks should be drained and where possible flushed out with disinfectant.

Is there a reference specimen?: Yes. Specimens taken and tested for the DNA plague from all confirmed sites.

As the plague can spread throughout the water bodies connected to these infected rivers, all connecting streams, rivers and lakes should be treated as infected and emergency containment measures also applied to them.

Summary of potential impacts: Establishment of the crayfish plague could result in 100% mortality of the protected native White-clawed Crayfish (Austropotamobius pallipes).  Throughout its European range, this species has been decimated by the impact of Crayfish plague disease which spread to Europe with the introduction of the plague carrier North American species of crayfish.

The implications of this disease occurrence are extremely concerning. If crayfish plague continues to spread and become established there is a high probability that the native White-clawed Crayfish will be eliminated from much of the island.  Worryingly would be the establishment of non-native crayfish as the experience in Britain and Europe has been that these species have very severe impacts on habitats and other species. Could also be potential impact on salmon and trout fisheries with the loss of  tourism revenue from these fisheries.

What can you do?

Invasive status: Crayfish plague is listed as one of Ireland’s most invasive species by Invasive Species Ireland. This species is listed by DAISIE as among 100 of the worst invasive species in Europe. All non-native crayfish, which may be carriers of the crayfish plague, are listed on the Third Schedule Part 2 of the European Communities (Birds and Natural Habitats) Regulations 2011 in Ireland. Five non-native crayfish that have gone through a detailed risk assessment process are each assessed at MAJOR risk of impact to Ireland see: http://nonnativespecies.ie/risk-assessments.

Pathway of introduction: Either the disease was introduced accidentally on contaminated equipment (e.g. wet fishing gear, canoes/kayaks, boats etc used recently in affected waters in the UK or elsewhere) or else non-native species have been illegally introduced to the area and have now passed the disease to the native White-clawed crayfish.

If the disease outbreak was accidentally introduced on contaminated equipment then containment may be possible, but if non-native crayfish have been introduced then the disease is likely to become established with severe and probably irreversible ecological impact on Ireland’s freshwater fauna and flora if not acted on immediately.

Crayfish are freshwater relatives of the marine lobsters which they resemble closely. Species of crayfish can be found in many parts of the world with most species occur in North America (330 species) and Australia (100 species). There are seven European species including the White-clawed Crayfish which is the only species naturally occurring in Ireland. The populations of European crayfish have been affected by the impact of introduced mainly American species and disease (crayfish plague). The White-clawed Crayfish was listed on Annex II and Annex V of the Habitats Directive and the species is protected in Ireland under the Wildlife Acts. Ireland has international responsibility for the White-clawed Crayfish as it remains the only part of the EU with no introduced species of crayfish and no proven incidence of crayfish plague. The animal remains common in many lakes, rivers and streams in limestone districts. It is an important species ecologically both as a grazer of plants and as a favoured food item of the Otter.

NPWS has funded research on this species to look at monitoring methods for the species in lakes. Distribution data is also gathered to inform the Article 17 assessment.

Anyone intending to work on this species is required to obtain a licence from NPWS under Sections 22, 23 and 34 of the Wildlife Acts.