For the first time in Ireland, a Catalogue of Ireland’s Non-native Species (CINS) has been compiled. While lists of non-native species have been published for specific groups or environments, this is the first centralised database for all known non-natives where information on those species are presented in categories in a standardised format.  It is important to know what non-native species we have in Ireland so we can assesses from those what might be invasive species.

The value of standardising the information into a centralised system allows for easy analysis of the data to answer questions such as what are the main ways these species are being introduced into Ireland and what is the rate of introduction. Answering such questions can support policy and decision making to tackle future introductions. As the categories used follow the Convention of Biological Diversity and IUCN Invasive Species Specialist Group published terminology, this allows for the compiled data to be compatible for trend and prioritization analysis with other European and international countries.

Underpinning the Catalogue of Ireland’s Non-native Species is an audit of species checklists and published sources of information on Ireland’s biodiversity. While for some species groups such as terrestrial mammals or freshwater fish, it is well documented which species are native or not. For many other groups particularly insects, there was little to no information on native status. From the audit, we know that of the 31,513 species in Ireland, 1,277 are non-native. This number is of non-native species is in reality likely to be higher but due to the native status of the species not being published, undocumented or unknown, the available information is always likely to underrepresent the extent of non-natives in Ireland.

What’s in the Catalogue?

For the 1,277 non-native species listed in the catalogue, comprehensive profile information has been compiled for the 127 species at risk of high and medium impact and for the 66 EU Regulation Invasive Alien Species of Union concern with varying amounts of information for the remaining species. The fully referenced species profiles contain information on the species distribution, identification, ecology, pathways of introduction, risk assessment score, legal status and links to further information. Only categories that have information entered in them are visible.

As compiling information on all of these non-native species is a momentous and an on-going project, any referenced information you might be able to provide for the species profiles including good images would be gratefully received by e-mail to [email protected].

Click on image to access the Catalogue of Ireland’s Non-native Species and browse through the species profiled. 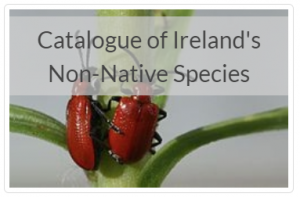 In 2018, information contained within the Catalogue of Ireland’s Non-native Species was also published through the Global register of Introduced and Invasive Species (GRIIS). You can search through the data using the http://griis.org/ portal but be mindful that the interactive Biodiversity Maps will not be accessible, neither will be the comprehensive species account information for those species it has been completed for.

The National Biodiversity Data Centre is very thankful to the time spent by Rory O’Callaghan working on the Catalogue of Ireland’s Non-native Species. Rory was based in the Data Centre as a JobBridge Intern.