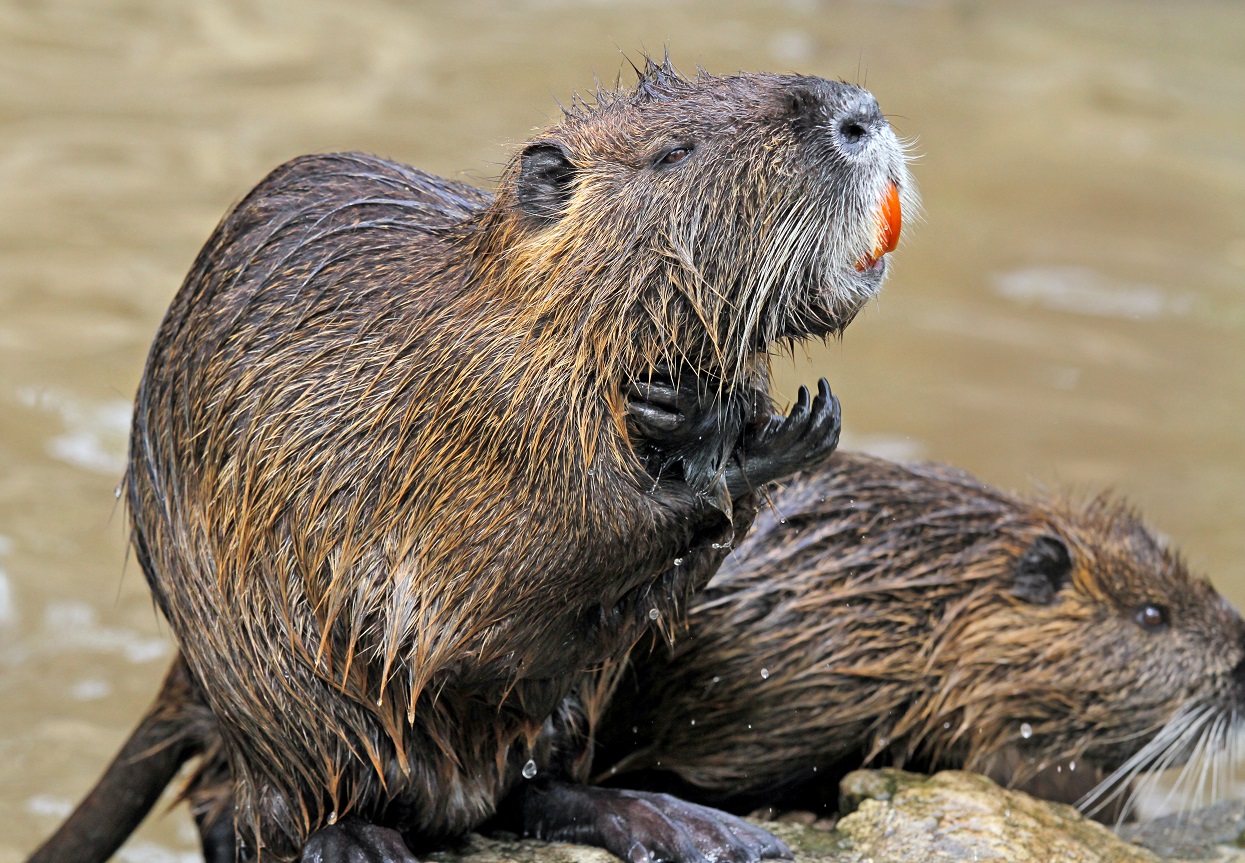 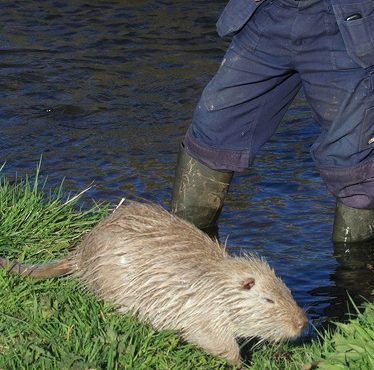 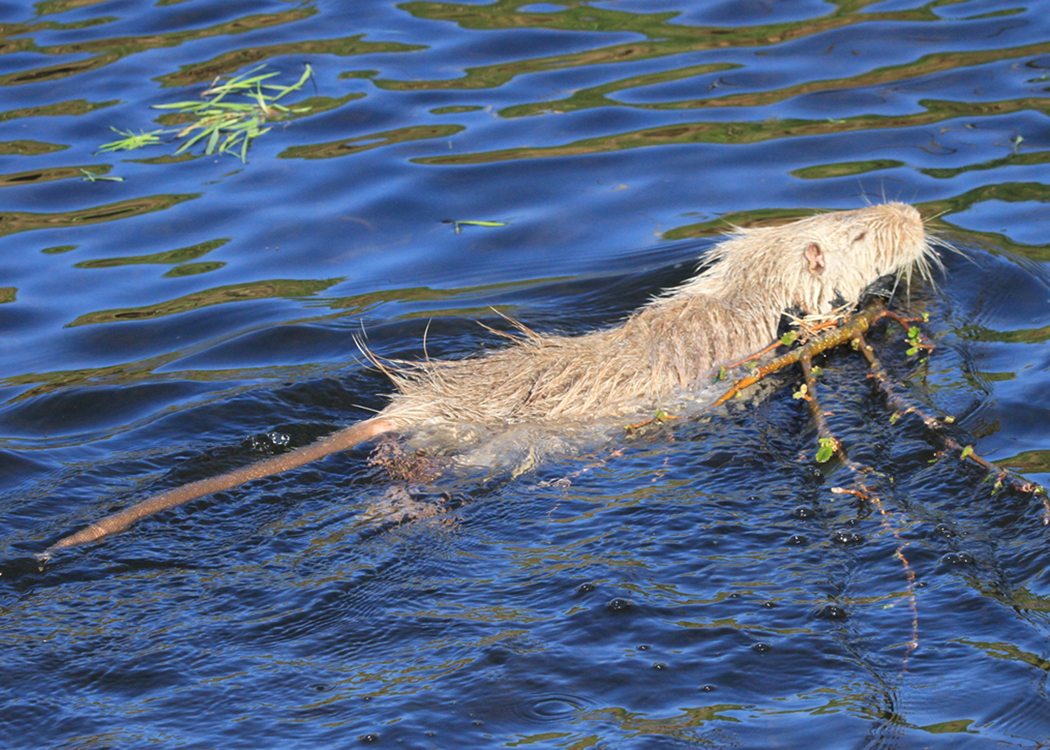 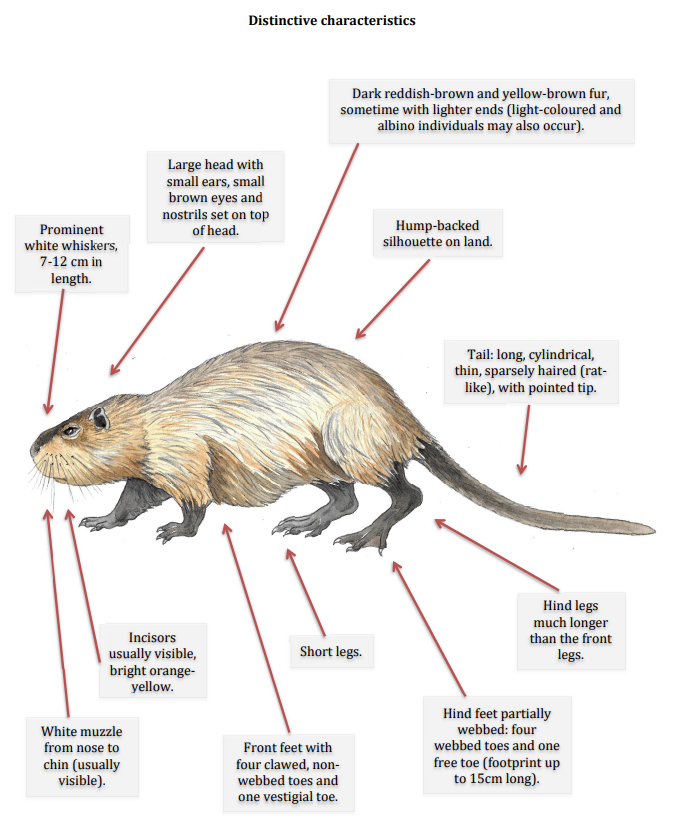 Coypu body form in and out of water. Image: circabc.europa.eu 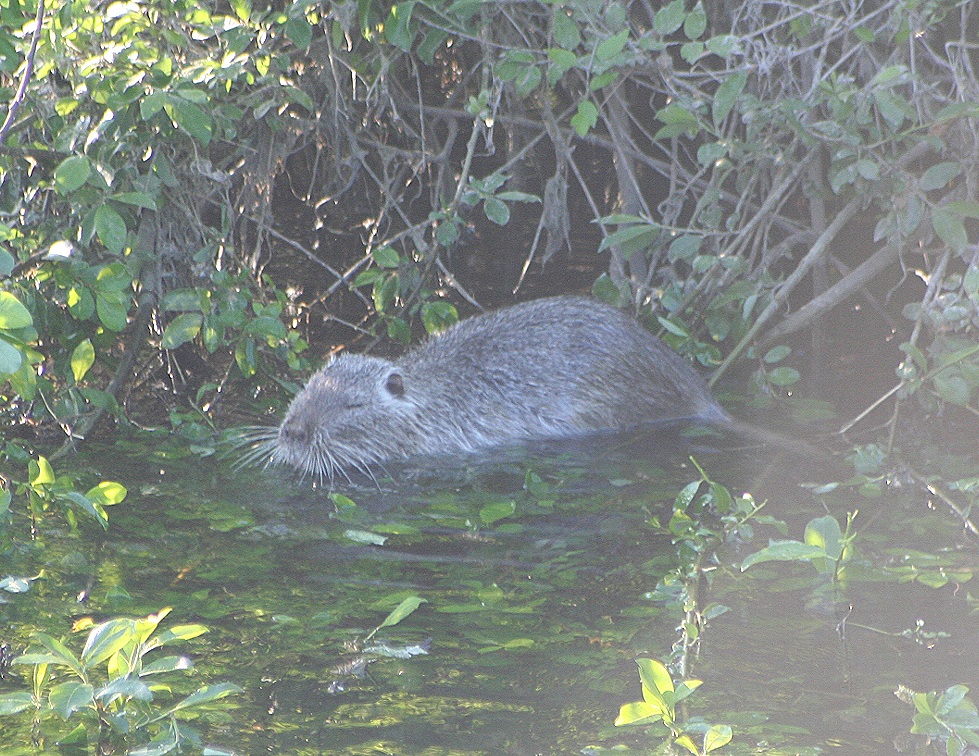 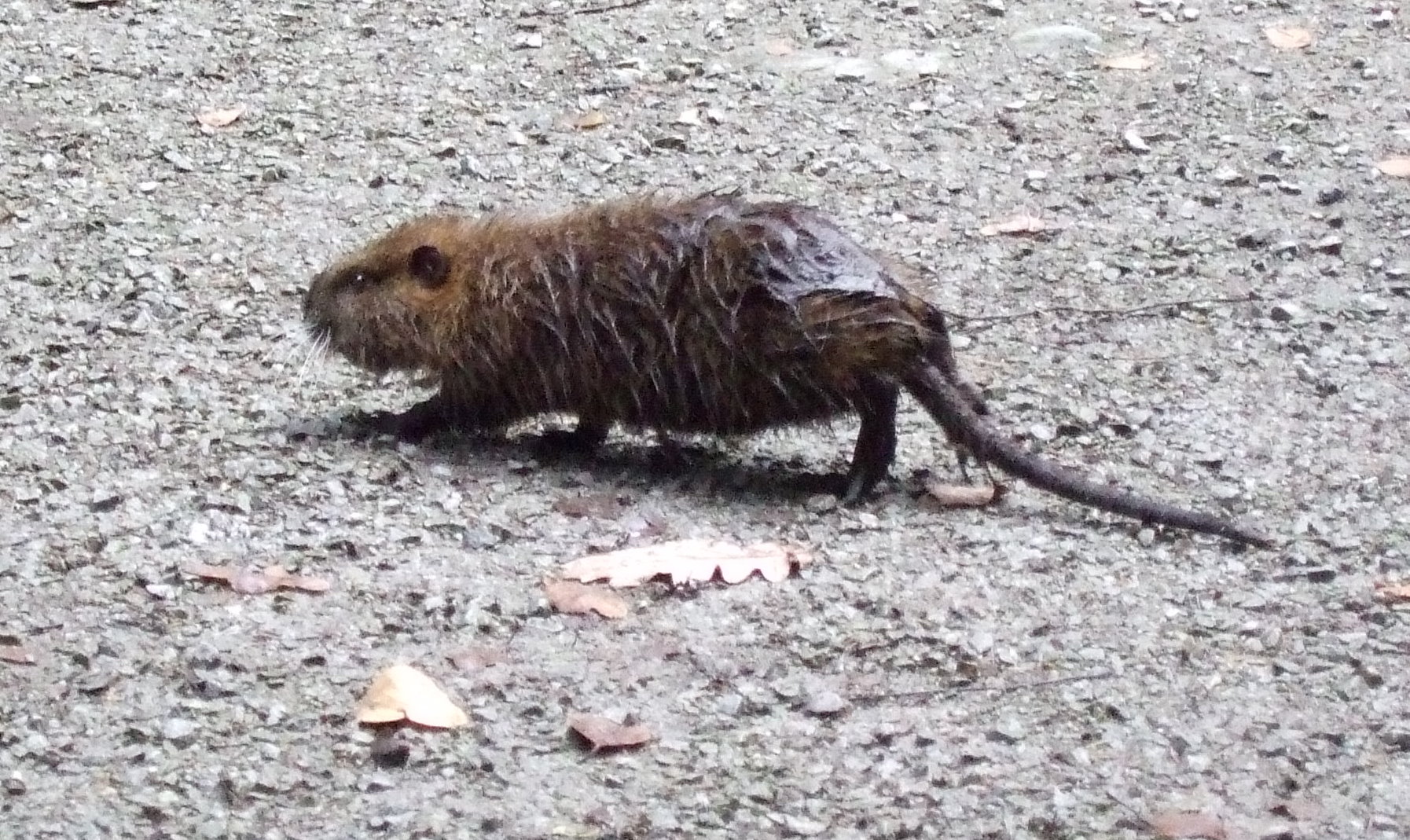 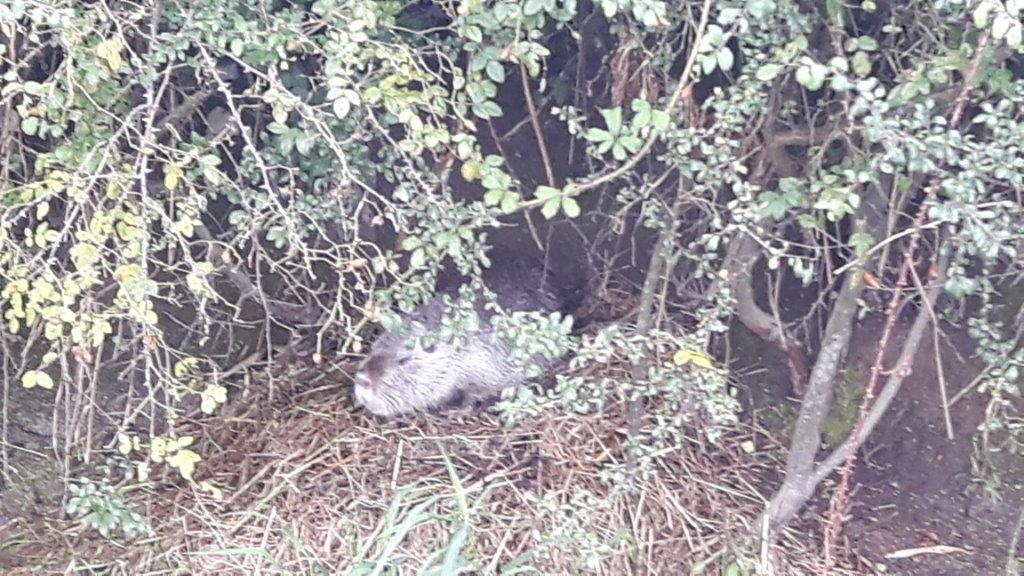 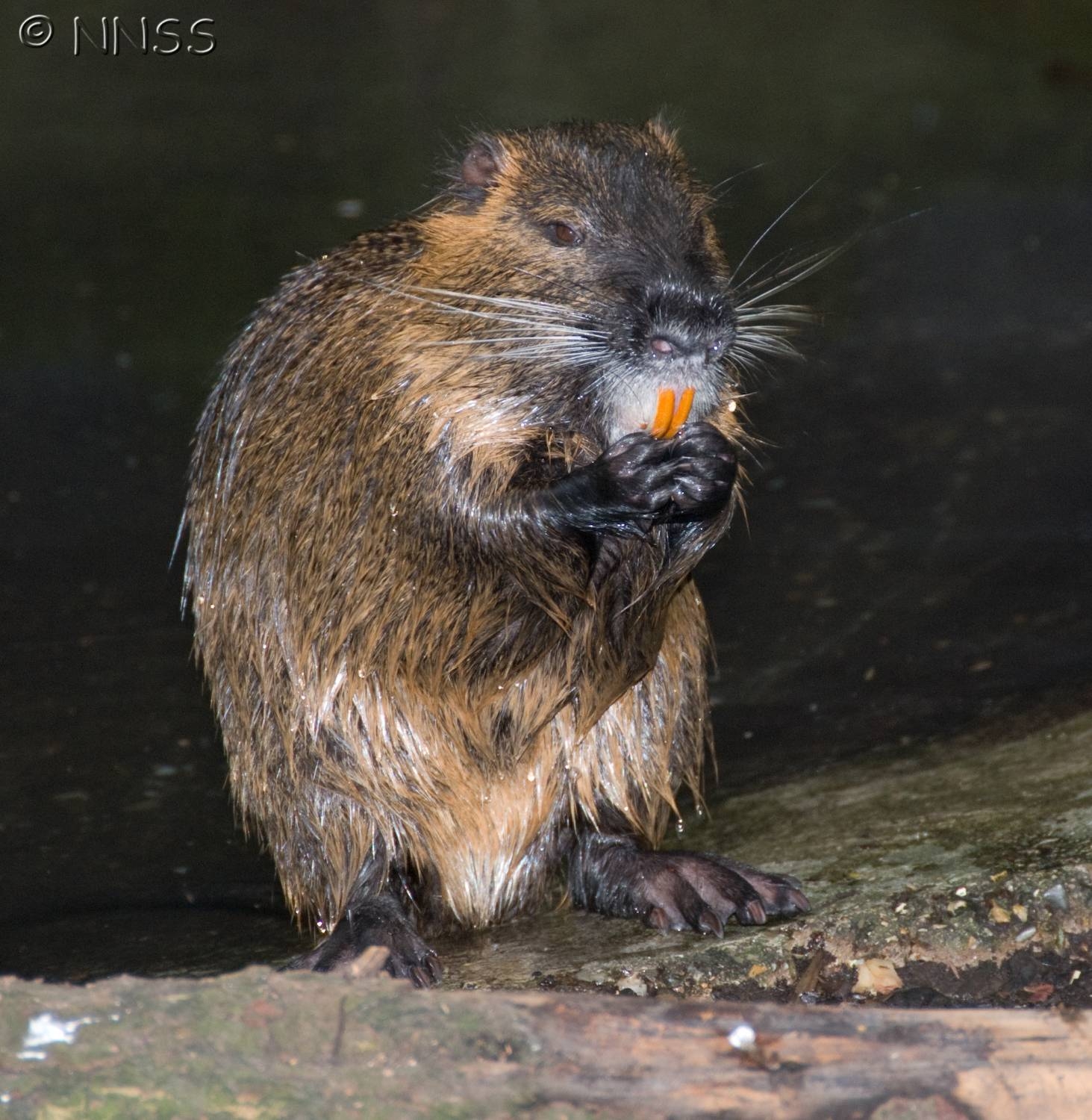 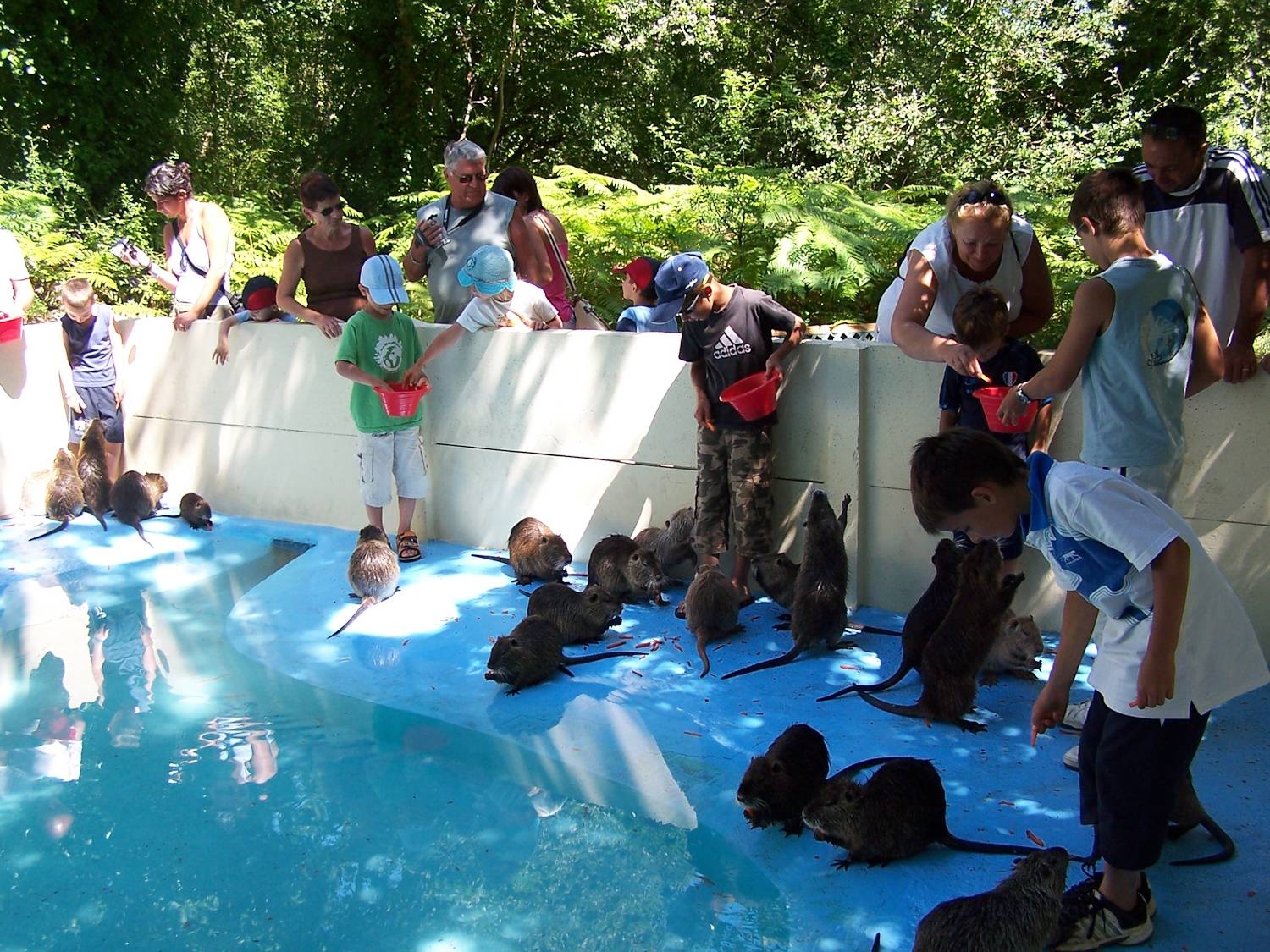 Coypu as a tourist attraction in USA. Photo: N. Moore

Tails of some non-native semi-aquatic animals including Coypu (Nutria)

Reason for issue: Public call for people to report suspected sightings of the invasive Coypu. Rapid response initiated in October 2016 in Curaheen, Cork City removed 10 animals but a verified sighting of a Coypu in the River Lee on May 7th, 2017 raises concern of its spread.

Identification features: Large semi-aquatic rodent that may be confused with otter. However, the following characteristics can help with identification:

Report any suspected sightings with a photograph if possible.

Invasive status: Assessed as having the potential to be a high impact invasive species in Ireland. It is one of 37 invasive alien species of Union concern under EU Regulation (1143/2014). It is listed on the Third Schedule Part 2 of the European Communities (Birds and Natural Habitats) Regulations 2011 in Ireland. This species is listed as among 100 of the worst invasive species in Europe.

Is there a reference specimen?: Yes. Animals removed from the Curaheen site in Cork City have been deposited with University College Cork.

Known distribution of Coypu in Ireland:

Since the first verified sighting in 2010, Coypu have been seen and reported from 7 locations. Just one animal was seen in 6 of the sites but a population of 10 animals was removed from Cork City in 2016. See Biodiversity Maps.

Pathway of introduction: The animals removed from the Curaheen area are believed to be linked to Coypu escaped from an agricultural show held nearby in 2015. The source of the animals  removed from Tipperary and Limerick in 2015 in unclear. Coypu are not known to be kept as a pet species in Ireland but are known to have been kept as a display species in some pet farms. Their introduction into Europe is linked to fur farming.

🚨Chinese mitten crab alert! Here's what to do if you spot one:

📷Photograph from above, below & sides to aid identification.
🔐Retain in a bucket of water, secured with a lid!
📢Report sighting #ReportInvasives
🛥️Remember to #CheckCleanDryIrl

Report any further sightings of this species to
👉https://bit.ly/2J7mI3G

Read more about previous sightings of this species
👉https://invasives.ie/species-alerts/chinese-mitten-crab/

Invasive species are inadvertently spread throughout Ireland as plant fragments, seeds & eggs with movement of soil. Checking & cleaning before moving off-site can reduce the risk. An action plan on this pathway is in draft https://bit.ly/3Etat0l #BewareOfAliens #ReportInvasives

1/2 Great to have been involved in two clusters of the #BewareOfAliens awareness campaign developing key messages for key audiences with @atusligo_ie @UK_CEH and @adelphi_berlin. Fantastic resources including including this short video on soil borne #invasivealienspecies produced

🧐Looking good! Can't wait for the printed versions @Secretariat_IAS
To see which species have been recorded in Ireland go to 👇
https://invasives.ie/about/ias-union-concern/